Windows have always fascinated me because it is an insight to another world.  Depending on where the window is placed, what surrounds it and what can be seen through it, a story can be told.  When I saw this topic as the Weekly Photo Challenge, I decided to post some of my favorite window images that I have done in the past (and maybe a new image, if I have the time as well).  Note that many of these are fun composite images.

The first photo on the left was taken at a hotel in Huade County, China when I was in the SSLP program in 2008.  At that moment, the wind fluttered through the window and made the curtains billow out in an elegant manner.  It gave me a sense of surreal beauty, as if nature had something to communicate.  I shot the image through the open doorway, as if the viewer was seeing the moment through a secret frame.  I always wanted to do more with that photo, but didn’t know what exactly.  The middle photo was taken at the Global Winter Wonderland in San Jose in 2011.  It was nothing special, just a nice photo of me.  When I decided that I wanted a nice profile picture of me that was somewhat “inspirational” and “surreal,”  I decided to put the two images together to form the third.

Composite #2: His and Her Dream

I had always wanted to incorporate “windows” into the cover of my Whisperings poetry book, as I felt it went well with my poems.  When one looks outside a window, one discovers the world and how one may fit in.  To me, it can symbolize soul searching,which was what a majority of my poems were about.  However, I needed to find a good window.  I came across one in a Bed and Breakfast near Elk Grove, CA.  I initially focused on the middle photo, which is of me peering through the window, trying to “find” myself.  My boyfriend took the image.  We decided to snap a few more photos just for fun, so I took the same photo of him peering out the window.  I eventually converted all the photos to black and white, because I like the old school look of making things more mysterious, without color being a distraction.  The third photo is a composite image of the two.  I like the implied story of it, as if the lovers were looking outside the window, each focusing on his or her own dream, discovering themselves together, but separately.

Composite #3: It’s a Beautiful World Outside 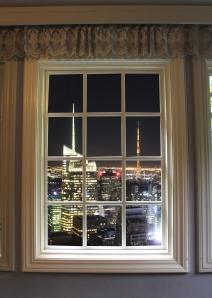 These two were also fun composites that I did (sorry I didn’t crop it all the way for you).  I work at Shutterfly, so we have promo codes for Wall Decals.  I always thought it would be really cool to have a “fake window” on my wall.  With a fake window, I could pretend that I lived anywhere in the world, based on what I saw outside the window.  I found a decent looking window at a club house at a park in Belmont, so I used that as a frame.  The left photo contains an image from Big Sur (a trip I took in 2011).  That window is actually up on my wall and I get to pretend I live in a Beach House and enjoy the ocean.  The window on the right contains a view of New York City, taken from the Rockefeller Center (a trip I took in 2012).  I wanted to pretend I was living in the Big Apple, but I actually haven’t put that up on my wall yet (maybe one day).

A window is a simple object, but a single window can tell so many stories.  I hope you enjoyed mine.