Since Halloween just ended, I thought it was a good opportunity to post my other darkish flash fiction piece that I wrote in 2005 before moving back into the realm of poetry.

Laylona bolted out of her bed as she heard a roar of thunder followed by a terrible screech. From the corner of her eye, she saw a black figure race into the darkness. Darn that stupid cat, always so cowardly, Laylona thought. Nevertheless, she grabbed her coat and went after her beloved Sir William. After all, it was the only thing her mother had left behind.

A tear started to fall from Laylona’s eyes as memories of her mother flooded back to her. She could still remember the day her mother had come running, holding two ice cream cones in her hands. Yet Laylona never tasted that Rocky Road because her mother never made it across the street. A red mustang, going 80 mph, had slammed into her, spraying blood all over the gray cement. Laylona had suffered from depression ever since that day, but luckily, she had found an escape, a way to avoid the pain.

At that moment, Laylona noticed a dark shadow dart across the bramble weeds and disappear behind the open doors of a huge mansion. She couldn’t help but hesitate at the entrance, wondering if this was the legendary haunted house talked about among the townspeople. There was no time to decide as the rain started pouring. Laylona gently touched the wooden door, which groaned in return.

“Anybody home?” she squeaked. The sound of rats scurrying across the floor was the only response. As Laylona took two steps into the house, a gust of wind whipped past her, and the door slammed shut. The house was then filled with an eerie silence, a kind of anticipation, like a mummy ready to be reborn.

Lightning continued to flash outside and Laylona was able to piece together the interior of the house. In the center of the room the once glamorous 15th century furniture was covered in cobwebs and the cream colored rug on the floor was stained with rat urine. Aligning one side of the wall was an elegant cabinet of wine glasses, no longer shiny, but worn with age. Laylona gasped in amazement, but her glimpse of the house was over when the lightning stopped, engulfing her in darkness.

Then, as if by magic, a light appeared before her eyes. Laylona saw a woman with dark flowing hair dressed in a white gown. It was her mother and in her arms was Sir William.

“Here,” whispered her mother, extending her hands to offer the cat to her daughter. When Laylona took hold of Sir William, her mother disappeared.

“Mom?” she called into the darkness, but there was no answer. All of a sudden, she felt a searing pain in her arm and found herself staring into the devilish countenance of the cat. A set of burning red eyes, accompanied with sharp, piercing fangs, pored into her very soul. 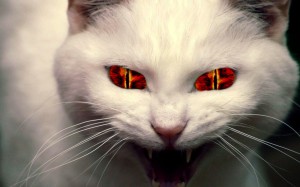 “YOU WILL NOT LEAVE THIS HOUSE!” croaked an inhuman voice.

Laylona felt her heart beating ferociously as she tried ridding herself of the cat, but her struggle was to no avail. Stifling a cry, Laylona reached into her pockets for her savior. Throughout the hard times, these LSD pills had given her the courage to go on, but this time it wouldn’t work. This time around, they were the cause of her suffering.

Hard as she tried, she could not escape. Hideous laughter filled her ears.